Here are the plant species we carry in our greenhouses and ponds. You can find specific details by following the link on the plant description.

Anubias barteri var. coffeefolia is a very beautiful, low cultivar of Anubias barteri. 15-25 cm tall and a creeping rhizome from 10-15 cm or more. It is characteristic that the leaves arch considerably between the leaf ribs, and the new leaves are red-brown. The colour combination and leaf shape make it an attractive variety in both large and small aquariums. It flowers frequently under water but does not produce seeds there. Anubias species seem to grow so slowly that they do not realise that they have been submerged. It is not eaten by herbivorous fish. 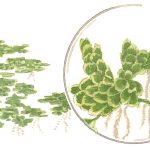 Azolla caroliniana from North America is a small (1-2 cm tall), floating fern housing blue-green algae in its leaves. These algae are capable of absorbing nitrogen from the air, which can then be used by the plant.

Azolla filiculoides is used as nitrogen fertiliser in rice paddies, and as animal feed. There are several related varieties on the market, with similar appearance. A decorative plant for open aquariums. 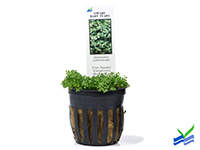 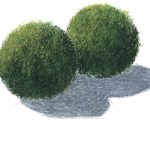 Cladophora aegagropila is not really a plant, but a ball of algae from 3-10 cm wide. It is a decorative exception from the rule about avoiding algae at all costs. It is normally found in shallow lakes, where the movement of the waves forms it into a sphere. In an aquarium it must be turned regularly to keep it in shape. Cladophora aegagrophila can be divided into smaller pieces, which become spherical with time, or which form a carpet, if attached to roots and stones. Protected in parts of Japan.

Crinum calamistratum from West Africa is a very graceful bulbous plant with dark-green, very narrow leaves. The curly leaves becomes 40-120 cm long. It forms smaller bulbs than the other Crinum-species, and demands more light. In the aquarium plants that are thriving form a number of small bulbs. It is not eaten by herbivorous fish. It can also be used in brackish aquariums with low salt concentrations. 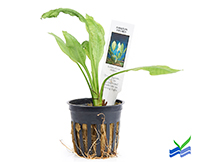 Echinodorus bleheri from South America is undemanding and beautiful, and becomes 20-50 cm tall. A nutritious bottom promotes growth, but the plant needs pruning to prevent it depriving plants underneath of light. Echinodorus bleheri does well even in poorly illuminated aquariums, as it grows towards the light. It is a hardy and easy solitary plant for both beginners and the more experienced with quite large aquariums. It has been sold under the name ”Paniculatus”. This beautiful plant is a hybrid between Echinodorus horemanii ‘Red’ and Echinodorus horizontalis. It was first produced in 1986 by Hans Barth in Dessau and becomes 25-40 cm tall and a rosette from 15-25 cm wide. New underwater leaves are a beautiful pink, and initially the leaves have red-brown spots. A nutritious bottom promotes growth, but otherwise Echinodorus ‘Rosé’ is undemanding and thus an excellent plant for beginners. 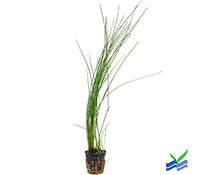 This American Eleocharis is in a fresh grass green colour and grows to be 20-40cm high. It is basic and low maintenance. Each straw is only few millimeters thick and the plant maintains an open form of growth. It is suitable as a background plant, and can further be planted in front and in the centre of the aquarium, in transparent wads, in order to create depth and perspective. The plant spreads through runners, which occasionally have to be trimmed and maybe planted elsewhere. 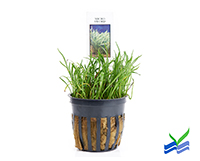 Lilaeopsis brasiliensis from South America can grow very compact, but a “lawn effect” (4-7 cm tall) is only achieved at high light intensity. When planting in the aquarium small clumps (approx. 1/8 pot) should be placed a few centimetres apart to help the plants grow together more quickly. Place in an open position without shading from other plants to ensure good light. Lilaeopsis brasiliensis can be used in garden ponds, and also tolerates low salt concentrations in brackish aquariums. 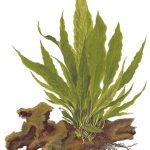 Microsorum pteropus is a water fern from Asia, 15-30 cm tall, which should be grown on a root or stone, attached with fishing line until it has gained a hold. If it is planted in the bottom, do not cover the rhizome because it will rot. Easy to propagate by splitting the horizontal rhizome. A hardy plant which grows in all conditions. The black spots under the leaves are sporangia (reproductive organs), not signs of disease as many believe. 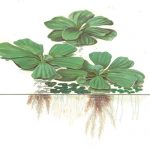 The floating plant Pistia stratiotes is widespread in the tropics where it is often considered a plant pest due to its rapid growth.
The plant is well suited for garden ponds in the summer.

In the aquarium, it develops flat rosettes that readily form runners and make slight shade to other plants in the aquarium. The surface will however be covered quickly which is why they need to be thinned out regularly. The beautiful drooping roots are very decorative, and provide excellent hiding places for eggs and fry of various fish. Pistia is a very good “indicator plant”: slow growth and very pale leaves are signs of nutrient deficiencies in the water. 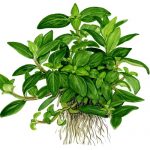 Staurogyne repens is a fresh green, compact and hardy plant for the foreground of the aquarium and it was found in River Rio Cristalino in the southern Amazonas. Its nearest relative in the aquaristic is Hygrophila but Staurogyne is different with its marked compact, low and bushy stature (5-10 cm) and small green leaves (each stem is 3.4 cm wide). During planting in the aquarium, the longest upright shoots should be cut off and new horizontally creeping shoots will soon form from the plant basis and gradually colonize the gravel. 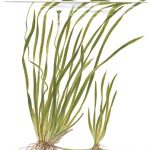 Vallisneria spiralis ‘Tiger’ from Asia is an excellent plant for beginners, growing in virtually all light and water conditions. The name ‘Tiger’ is due to its striped leaves (30-50 cm long, 1-2 cm wide). The relatively short leaves make it suitable for small aquariums, and the leaves are also narrow so they do not overshadow smaller plants. Forms runners easily, and is thus easy to propagate.